(The following article was originally published in July 2013 by Immersed Audio, an online music site that has since been closed.) 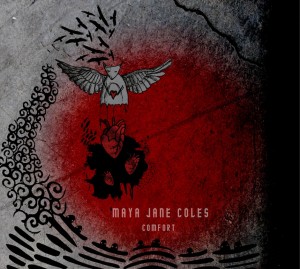 It seems pretty bonkers that Maya Jane Coles is only now releasing her debut album ‘Comfort’. It feels like she’s been on the electronic music map forever, in one or another of her many guises: either as herself – predominantly a house artist, DJ and producer – or as her alter ego, Nocturnal Sunshine, or even as one half of electronic dub duo ‘She is Danger’, who together were responsible for stand-out remixes of Massive Attack and Gorillaz among others.

Maya, who herself has remixed such artists as Little Dragon and The XX, was pretty exceptional from the very beginning. I remember checking her out on Myspace in around 2006, when she was just starting out, and being blown away with what she was doing, bearing in mind she would have been about 18 years old at the time! But then considering that she started producing her own music at the age of 15, she was an old pro by then I suppose.

After releasing her first EP to critical acclaim in 2010, she rapidly rose to the dizzying heights of unprecedented success. As a world-renowned deep house DJ she’s been championed by every electronic music magazine under the sun over the past few years…..in November, even Rolling Stone rated her 15th best DJ in the world!!

If that’s not enough, she releases her debut album on her own record label I/AM/ME and even created the artwork herself. After being one of the most successful house DJs of the last decade…is there anything she can’t do?! I mean, it’s just showing off now isn’t it.

Following on from her phenomenal DJ Kicks contribution released last year, ‘Comfort’ takes Maya Jane Coles to a new domain. Talking to Clash magazine recently, she explained why the album has been such a long time coming: ‘I wanted to build my fanbase and have people waiting for what I was going to do before I released it. I didn’t want to make a debut album for it to just get lost. You see good artists disappear on the ‘net all the time’.

Well it’s here now, and she has succeeded in creating an original and infectious collection of tracks, and not so dance floor focussed as some might expect. Intense and hypnotic, ‘Comfort’ offers a stylised assembly of house and electronic beats that build pleasure and excitement whilst creating sublime, atmospheric landscapes equally bathed in shadows as they are in illumination.

Lyrically introspective and confessional at times, the significance of the vocals, which feature on every track on this album, establish what Maya’s EP ‘Easier to Hide’ (released in September last year) indicated, with Maya herself singing on many of the tracks. Guest vocals and co-writers include Tricky, Nadine Shah, and Hercules and Love Affair’s Kim Ann Foxman. It’s an eclectic and inspiring mix, well selected by Maya.

Track one, and title track, ‘Comfort’ sets the tone for the album, and draws you in with its down-tempo ambient house beats, offering up blissed-out depth and tension on a starter plate. It glistens with eroticism and the arpeggiated synth hook takes you soaring serenely through the track. Orb-esque drum sounds and rhythms morph out of one another, taking the listener down one dark shimmering highway before shape-shifting into another. Maya’s vocals are drenched in reverb adding to the dreamlike quality of the track. The commanding yet subtle beauty of her vocals are slightly reminiscent of Róisín Murphy here, and are perfectly positioned within the track, complementing her rhythms idyllically. Mesmerising stuff!

If track one is the build-up, then the second, ‘Easier to Hide’, is the release. The BPM shifts up a gear and it’s easy to see why Maya chose this killer deep-house tune as the lead track for her EP at the end of last year. It’s gratifying rhythms galore, and really is an absolute corker! Again – moody, intense, and atmospheric but with the addition of cheeky little funky house riffs which kick in with the vocal, creating a genius-induced pleasure ripe for the picking. Throbbing bass in all the right places, Maya deftly works the dynamic of the track to perfection. Catchy vocal hook again….pretty much flawless!

‘Burning Bright’ ft. Kim Ann Foxman is the first collaboration on the album. It’s an uplifting and spacious tune recorded in New York’s Rad Studios. Maya’s own ‘Dreamer’ is next with chaotic, off-kilter, bleeps and an hypnotic, intimate vocal and melody.

‘Blame’ featuring the stunningly brilliant, and now critically acclaimed, Nadine Shah brings a whole new dimension to the album. Her mournful and gritty voice is exceptional. Unusual, melancholy melodies are used by both her and Maya here. “Don’t look down on me/You were once the same”, she bitterly asserts. The haunting discord of the track, which has a definite touch of dub-step, is masterfully unsettling and saturated with striking lyrics that stay with you: “You are heaven sent/And I am hell bent.” Maya’s use of such an exciting new artist also reassures us that we are in good hands here, and that she has her finger on the pulse across all genres of music.

‘Stranger’ offers more intensified, introvert and confessional lyrics from Maya, and a catchy chorus, emphasising that the pop sensibility she has is a strength she’s not afraid to use. ‘Everything’ ft. Swedish singer-songwriter Karin Park has shades of The Knife due to the combination of dark, edgy electronics mixed with Scandinavian vocal. This track is as dark and intense as it gets on this record, as a representation of obsessive love is captured in both music and lyric.

‘Fall from Grace’ ft. Catherine Pockson of Kingston upon Thames’s The Alpines, is a bit special and contributes an emotional weight to the album. ‘Wait For You’ ft. Tricky, as you would expect, is ferocious in its intensity, tautness and under the surface ferociousness. It’s a pretty stripped down, lusty affair. Minimal, raw and naked except for Maya’s bleeps, industrial whirrings and subtle backing vocals. Tricky’s signature vocals are more like heavy breathing than spoken word. It’s a sinister but arousing world they draw you into for 3.52 minutes, and one you’re not necessarily ready to leave once it’s over!

‘When I’m in Love’ ft. Thomas Knights, and ‘Take a Ride’ ft. Miss Kitten complete the collaborations, with Maya ending the album, as it started, with a track written, produced and vocalised by herself. The final track ‘Come Home’ is like Thievery Corporation meets Pulp Fiction with twangy guitars and down-tempo pulsating ambience.

‘Comfort’ reflects a need in Maya Jane Coles to produce a piece of work that means something away from the dance floor…something that shows that she is here to stay as an artist. This is another side to Maya, and not necessarily for everyone who has been an MJC addict up until now. Some hardcore fans will feel it’s too much of a step away from what they know and love her for, but for the ones she loses, she’ll gain in new form. Although poppier in some ways with its vocals and catchy choruses, ‘Comfort’ is intelligent, left of centre stuff. Maya is crossing over new boundaries here and reaching a different audience with her song-based collection, which has got to be a good thing. A serious product which, at 25 years old, she should be proud to have under her belt.