(The following article was originally published in August 2013 by Immersed Audio, an online music site that has since been closed.) 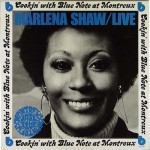 I discovered Marlena Shaw ‘Live at Montreux’ through the great man himself, Mr Gilles Peterson. He played the live version of ‘Woman of the Ghetto’, taken from this album, on his BBC 6 Music show back in January this year.

I knew the song ‘Woman of the Ghetto’ from the Trojan Records collection ‘Funky Kingston – Reggae Dancefloor Grooves 1968 – 74′, which I’d bought about ten years earlier. The version on that compilation, an album which is well worth a look itself, is by Phyllis Dillon and is also pretty damn special. I didn’t know that it was a Marlena Shaw song.

When I heard this live version from the 1973 Montreux Jazz Festival I was suitably blown away. The versatility and strength in Marlena’s voice and the quality of the performance is quite astounding. The performance in full was part of a Blue Note night at the jazz festival, which also featured the likes of Donald Byrd and Bobby Hutcherson.

The sleeve notes for the album read: ‘It is a special album because it captures her considerable personality and eloquence on stage, but also marks a distinct return to her jazz roots’. Although Marlena had started out in jazz, by 1973 she was probably better known for her soul pop classic ‘Californian Soul’, which featured on her 1969 album ‘The Spice of Life’, along with the original version of ‘Woman of the Ghetto’.

The epic performance of ‘Woman of the Ghetto’ from ‘Live at Montreux’ is amazing for two reasons. Not only Marlena’s awe inspiring breakdowns, improv and vocal riffing, but also, like the rib of Adam, the recording of that song gave birth to later musical evolutions. In 1997, Blue Boy sampled the record for his (only) massive international dance hit ‘Remember Me’, in a moment of pure pop perfection. Then, in 2000, French electronic nu jazzer, St. Germain, expertly lifted another sample from the beginning of the performance for his track ‘Rose Rouge’, the opener on his critically acclaimed and influential album ‘Tourist’ (another great record released on Blue Note).

The rest of the ‘Live at Montreux’ album is really for jazz enthusiasts and, for some, won’t be quite as accessible as some of Marlena’s other work. But it is a beautiful and uplifting performance including jazz renditions of Marvin Gaye and Stevie Wonder songs as well as 1950′s vocalese jazz classic, ‘Twisted’, a satirical yarn about psychoanalysis.

If pure vocal jazz is not quite your bag, then just check out the live version of ‘Woman of the Ghetto’, if nothing else. I guarantee you won’t regret it. It’s a powerful, gritty, jazz, blues, soul colossus. Blue Boy was well ahead of the game with this one…..